We’ve been hard at work putting together all the new features as we march toward Alpha! Here are some of latest progress we’ve been making that we’d like to show you. 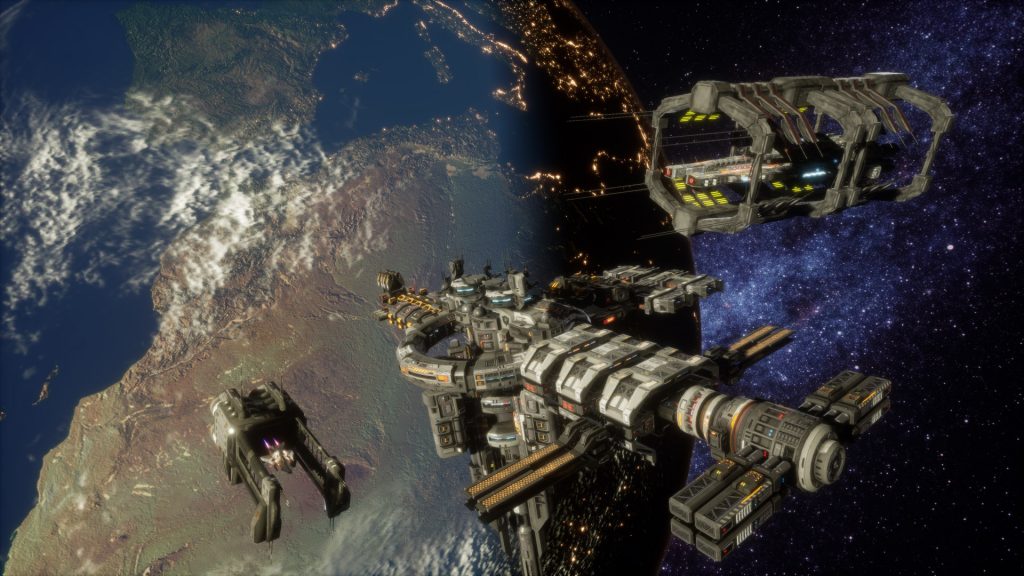 This new Space Station now comes loaded with different attachable modules that will grant you different perks for your campaign, such as Science Labs / Fighter Bays / Command and Control towers (for additional command points allowing you to command a larger fleet) / Storage facilities and more! Very similar to how we are designing the satellites, your space stations can also be customized with fitted modules so you may add/subtract different facilities depending on your current campaign needs. Along with these facilities, don’t forget to equip your stations with turrets and your latest weapons and defenses!

Space Stations are your main hubs for your fleets and campaign, however if you’re looking for cheaper means of production for your fleet, then look no further than these new Shipyards! 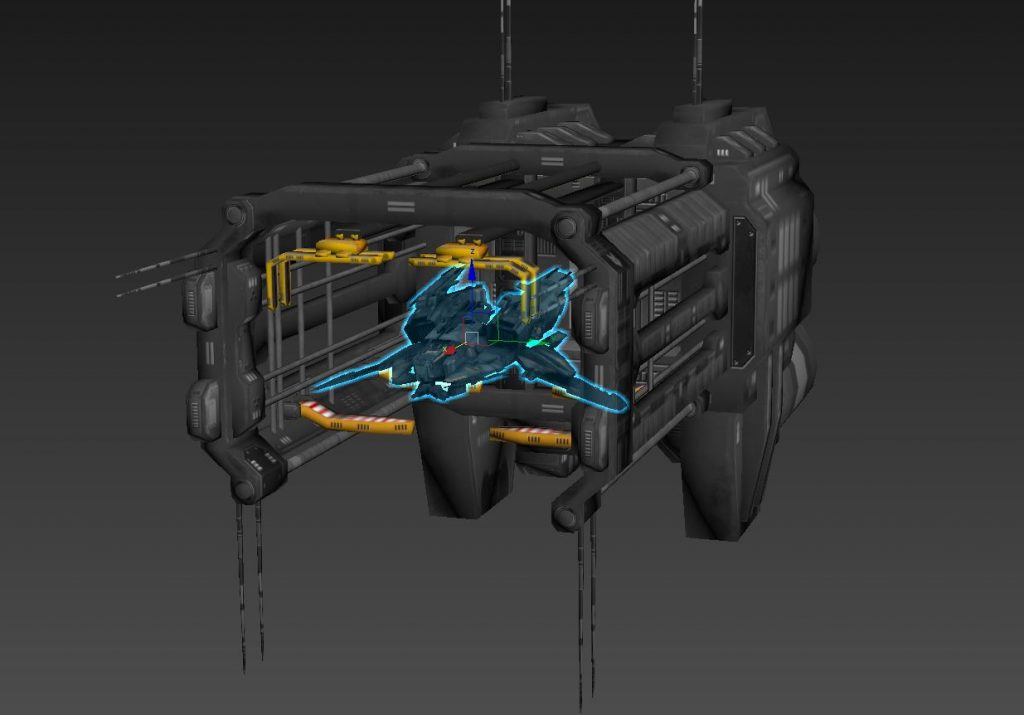 These new shipyards (Fighter size or Corvette Size) allow for remote manufacturing as well as drydock for repair and resupply for your fleet. With the correct amount of supplies stored within the shipyard, you will then be able give the command to the ship yard to repair or manufacture new vessels for your fleet. Be aware of the build times though with larger vessels! 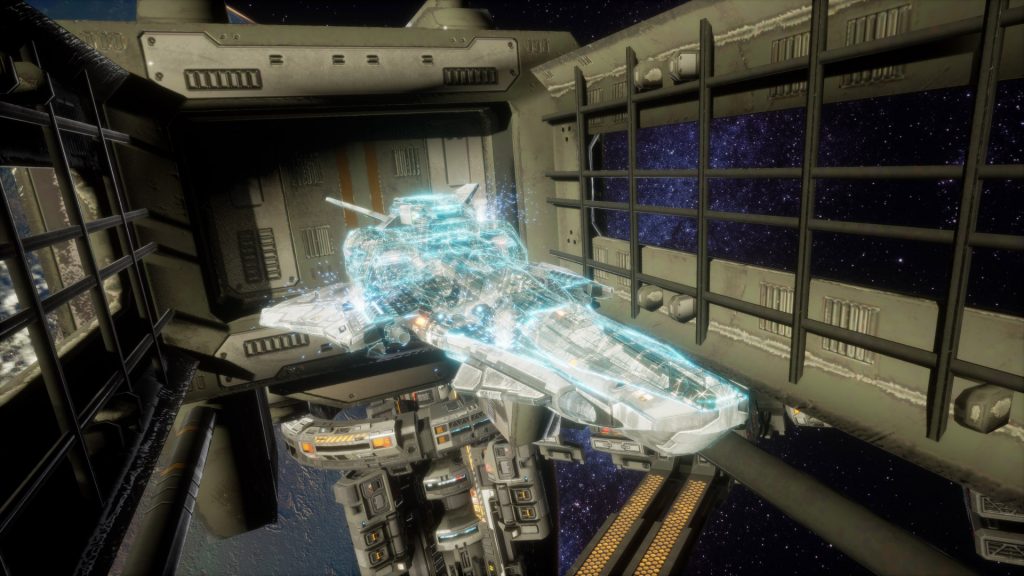 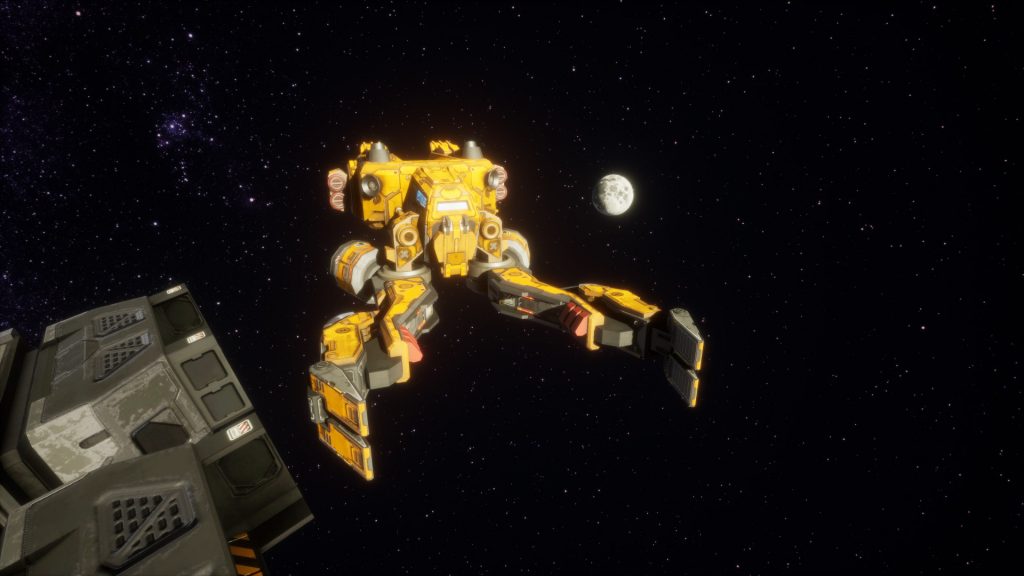 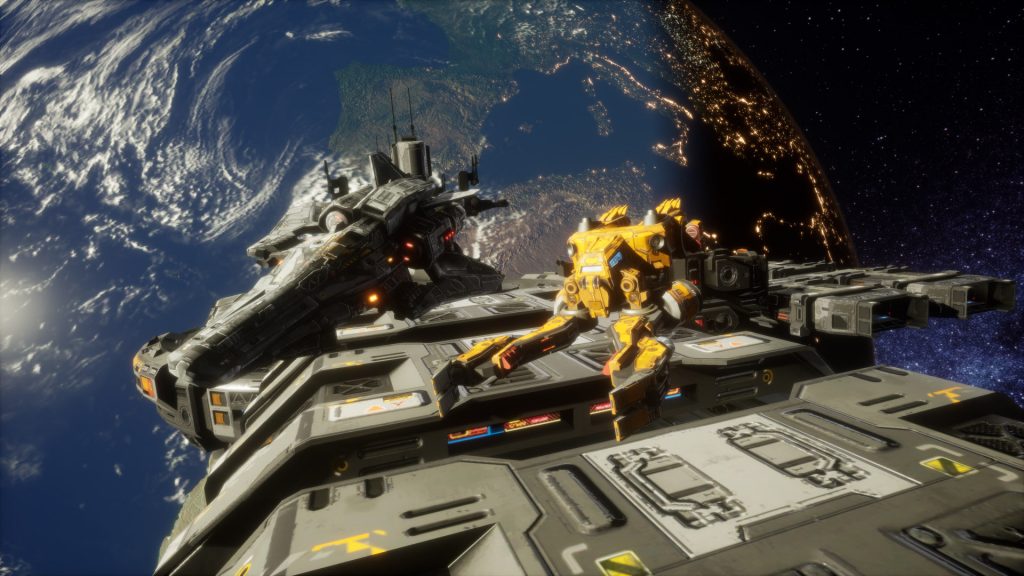 This vessel will be your work horse for your fleet as their function spans from construction to ship/station field repair to cargo delivery to even asteroid mining (assuming your success in capturing an asteroid considering the current Silicoid threat). The Hephaestus has a reinforced hull, allowing it to be a little more durable as it doesn’t need to be as fast as regular fighter when pushing around cargo. However, in a pinch, that reinforced hull can take a more hits than regular fighters. With that said, the cost of these vessels is a little bit higher than fighters as well so try not to lose them.

We have since improved the Planetary Defense Interface with a more streamlined HUD as well as some additional functional improvements. 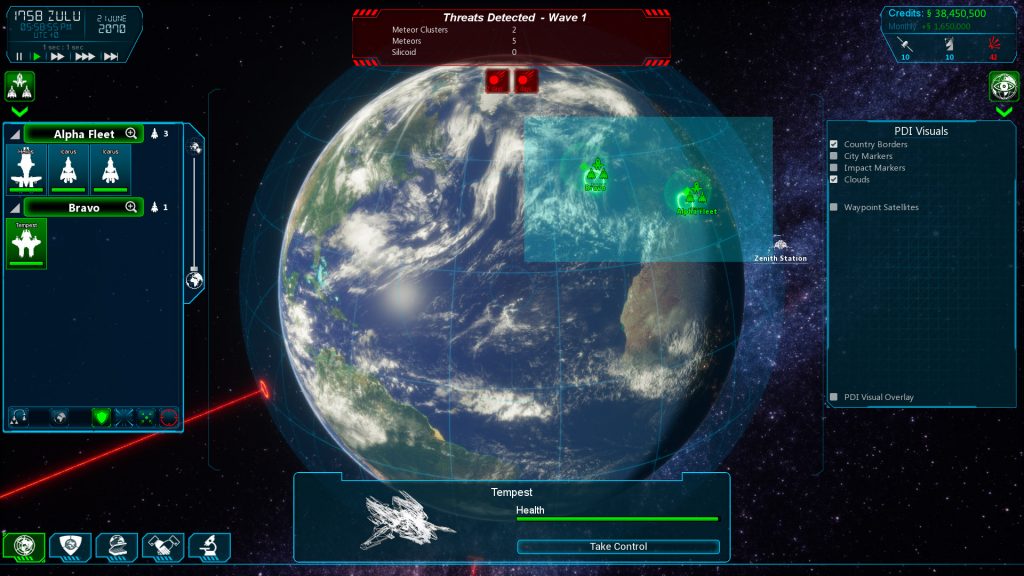 Starting off we have the new Box Selection. Using your mouse, you can now Left Click and Drag to create a box selection that selects all fleets within that selection box. Obviously making it easier to command multiple fleets at once to a similar destination/objects. This now also means that the selection/rotation of Earth has been moved to the Right Mouse button by default. However, Right Clicking and dragging has been setup to rotate the Earth and giving fleet orders will be ignored. Right-clicking WITHOUT dragging your mouse will still allow you to issue context sensitive commands such as attacking Meteor Clusters.

As also seen in the above screenshot, we are currently working on a new display for selected targets (Ships, Silicoid, Meteors, etc.) where if one target is selected, then this new display including a 3D wireframe of that target will also be displayed. We are currently looking at adding in additional features to this display such as localized display of damage / energy shields and sub-system targeting. We are also going to add into this display common status bars for things like Mag Drive Fuel / Ammo and Hull status. Please let us know if you would like to see more information in this screen.

This same display screen will also contextually change if you have multiple targets (multiple ships in your fleet for example) selected. This area will show the icons of the selected vessels in a collapsed form allowing you to give orders to multiple ships at once without relying on the fleet commands. 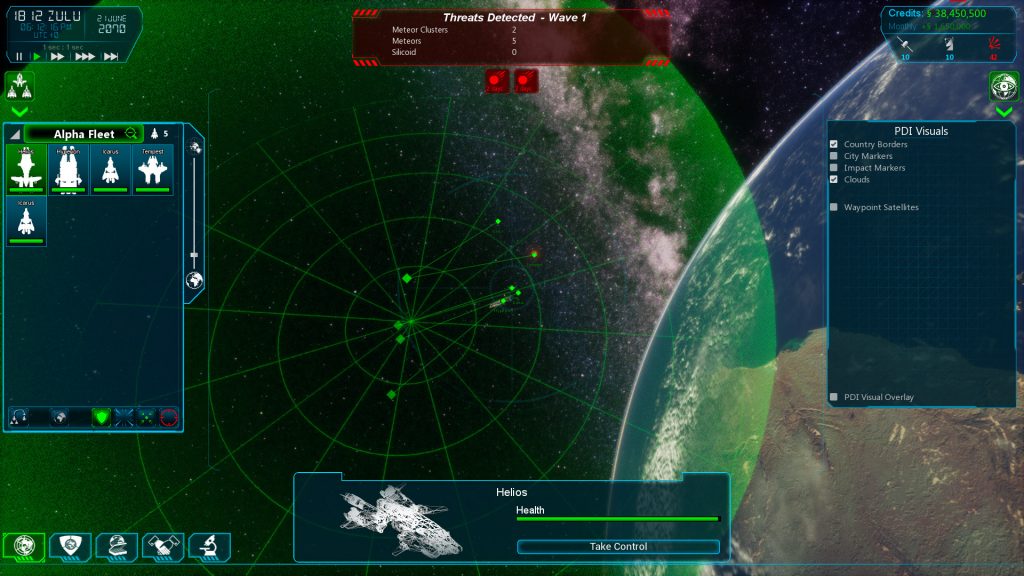 “Focused View” is just short hand for the “Zooming in onto anything within the PDI – Fleets/Meteor Clusters/Space Stations.

The first notable improvement here is the re-work of the ships to handle their own individual navigation and also be issued individual orders! This allows you if you wish to micro-manage your fleet battles from the RTS level rather than relying on the AI to clean up. From fleet group patrol sphere, a Planar circular grid is established with the hud, allowing you to right click and set move orders in empty space (you can even set the height of that move order as well just like the orbit sphere from the main PDI strategy view). Additionally, you can also right click onto different targets for a contextual action such as “Attack this target” command, allowing you to specifically give commands to your vessels to attack key targets.

This individual AI flight control also resolves the Demo bug issue of ships that are split from the Fleet to tend to crash into the Planet. Ships will now navigate properly to their Fleet Group’s waypoint destination on their own unless a specific command is given to them separately.

We plan on improving this system further with the idea of “Groups” within the fleets. After selecting a number of vessels, you can assign them to a numerical group by pressing [ctrl+any number]. This will then assign those vessels to be “Hot Selectable” by then pressing the same number again, allowing for quick micro-management of Fighter Groups vs Bomber groups, or what ever you will have in your fleets. We will also be extending this out to the Strategy View as well, allowing you to hot key different fleets or structures to be selected quickly via that hot-key. 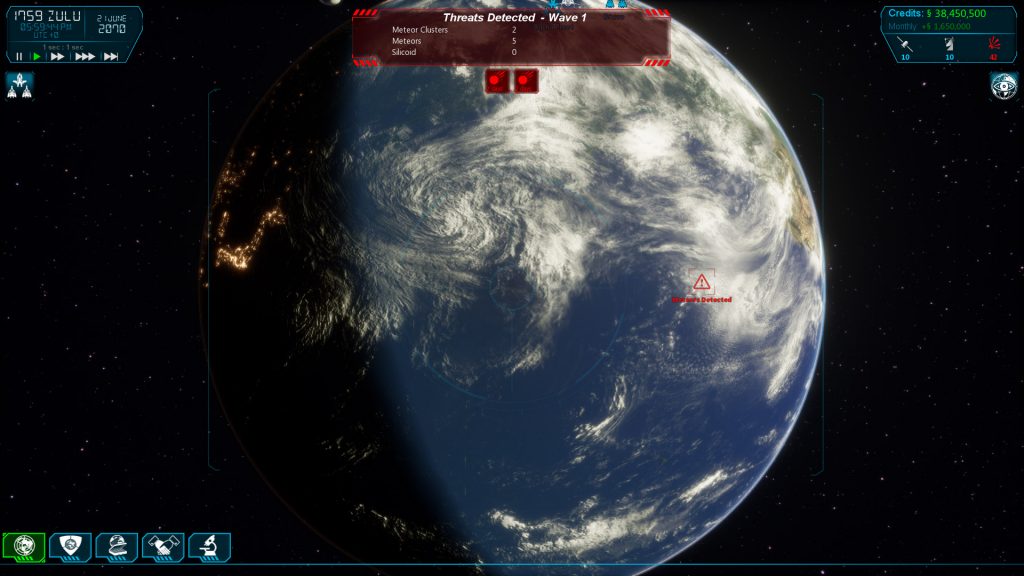 Since the demo, the Planet shaders have been improved. Toning down on the brightness of the diffuse as well as the atmospheric shader to be presented in a more realistic setting. We’ve also fixed the clouds to also include a slight normal map to give them depth with relation to the sunlight. 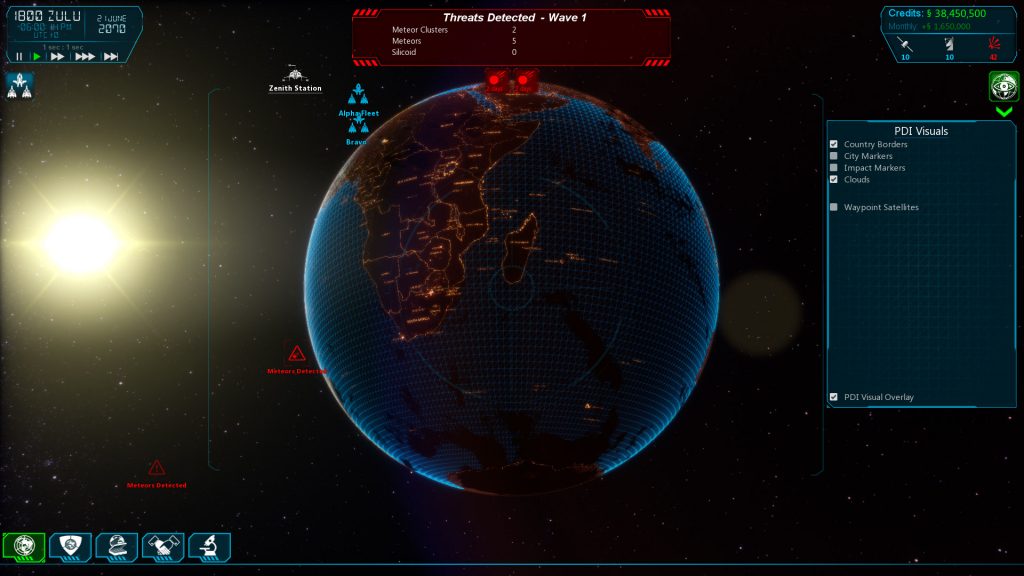 We have also improved upon the PDI visual shader as well with removing the transparency as well as giving the globe in PDI view a more holographic fresnel shading. We’ve also added a subtle “circular aperture” in the middle of the HUD that animates when you zoom in/out. 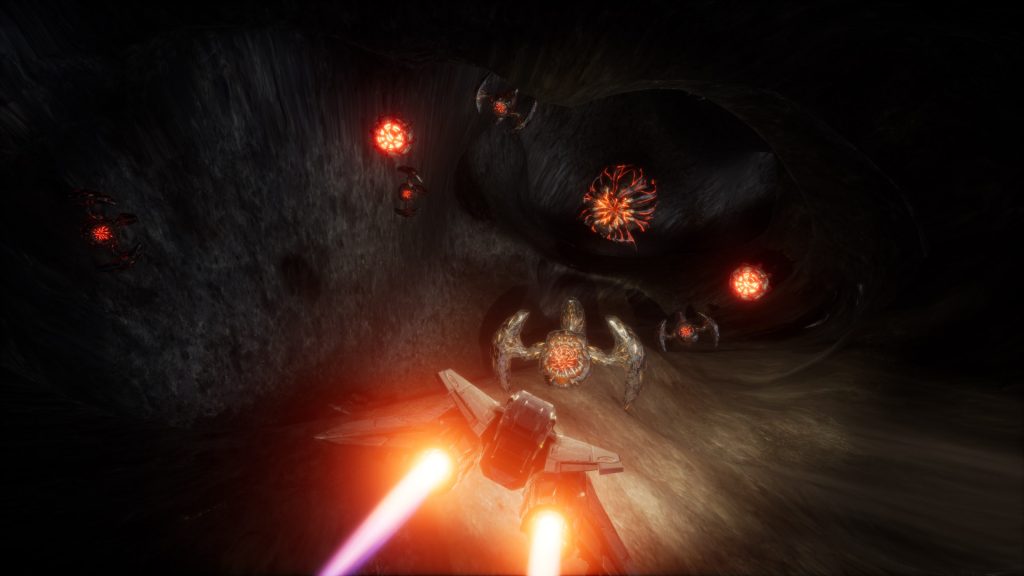 With the interior of the Mega-Meteors poised for the focus of the Alpha with relation to the Ship level combat, we have now needed to look into an additional flight mode. Along with the Normal (Throttle) and Drift (Newtonian) modes, we felt we needed a new flight model to handle the tight quarters of the Mega-Meteor interiors. We have begun work on a WASD “Descent-like” flight model. This model is setup to match the current environmental speed (since asteroids are moving closer to the planet) and allow you to activate your 6-DOF thrusters at will, otherwise they will bring you to rest relative to your environment.

One question we had though with regard to this Flight model and we put it to our Players;

Should this Relative Speed Flight Mode be engaged automatically when you are within “X” distance to the Mega-Meteor (or Target)?

Should this be a toggled option?

-WASD now allows you to rotate the planet as well
– [Tab] Cycles between Time Dilation speeds
– [Spacebar] Pauses Time Dilation
– PDI Focus and Camera Orbit have been unified into one system, which allows for a unified rotation/zoom system.
– The bottom menu has been visibly reduced in size and now sits at the bottom left of the screen. (Population and Public Awareness will go into the top right window)

We know it has been awhile since our last update and your demand for more updates has been heard. To provide you all with more updates, we will create shorter weekly updates every Friday for you to enjoy.

Thank you so much for you support! We will see you next week!