In this week’s update, we want to share with you some of the new gameplay mechanics with relation to the PDI. Not only will you be commanding fleets into battle, but you will now be able to take advantage of surface to space assets as well such as Nuclear Missile Silos! In addition, we’ve also been working on the Target Selection screen down in the bottom middle of the PDI HUD to act as a catch all for anything you have selected. This window will show you info on the Earth Surface, the Meteor Clusters or other space assets you have selected. 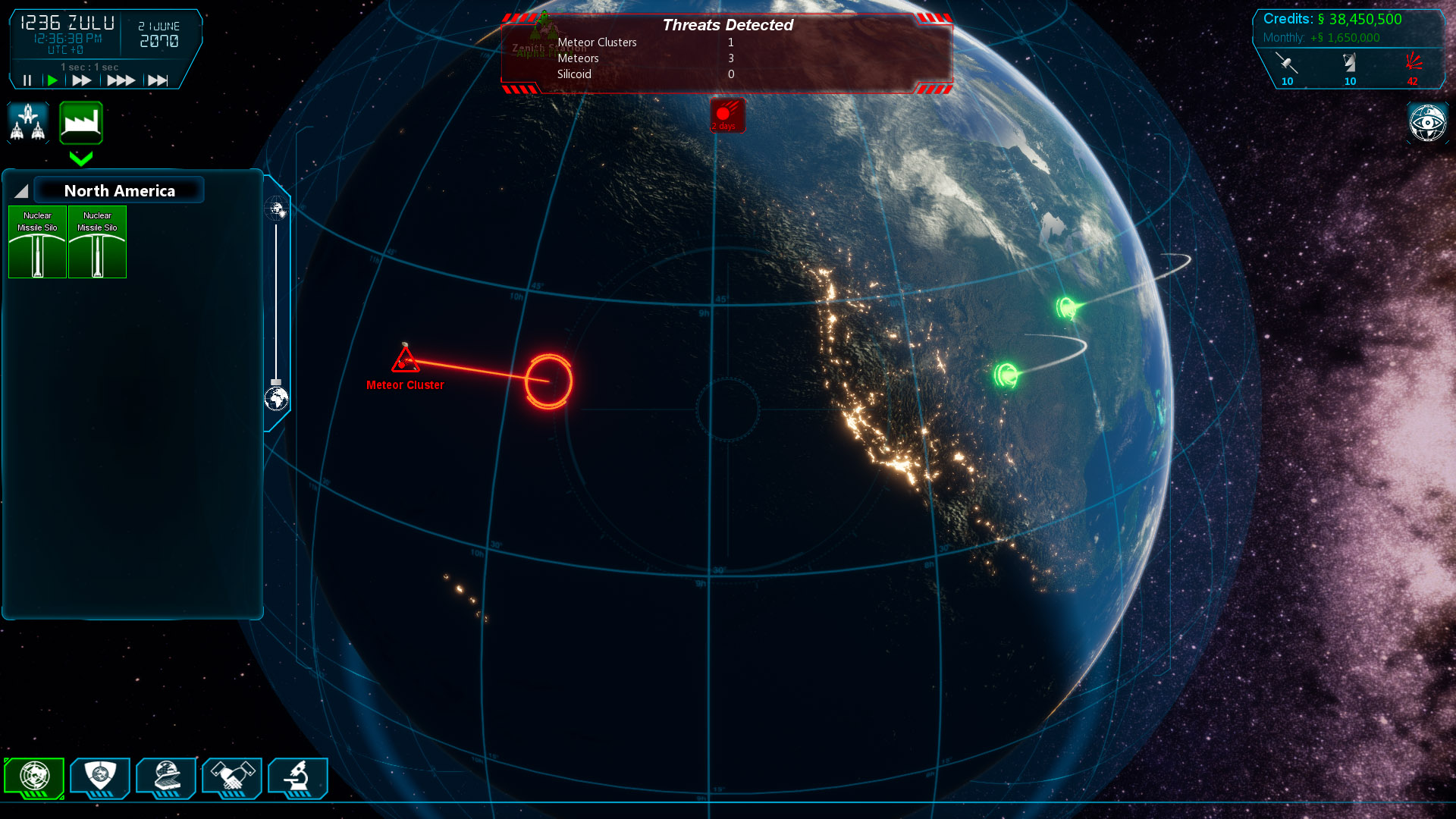 “Surface Assets” are a new category of assets you will now see on the left side of the PDI. These assets are fixed to the planet surface, but can be used for special actions such as these Nuclear Missile Silos. These silos can be orders to launch their Nuclear Missiles at Meteor Clusters and will detonate within a certain range of the Meteor Cluster. With a MASSIVE destruction radius, these Nuclear Missiles are an extremely powerful tool at taking out many common Meteor Clusters. However, be aware there are massive drawbacks at firing these Nuclear Missiles. Since these Missiles are easily detectable, many neighboring countries will be affinity toward the Solar Warden project for deploying Nukes into space. Furthermore, any Nuclear explosion from these missiles will undoubtedly create nuclear fallout in a large area over the land/sea that the nuclear missile was detonated, potentially resulting in massive human casualties. We believe these Missile Silos should be a last resort option in case our fleet is currently unavailable. Of course we leave command discretion up to you Warden.

Further Surface Assets that may be deployed on the Planet surface can be further developed as our technology advancements improve. Such assets include – Basic Resupply Rockets, Ground Batteries (Surface to space Energy Weapons), Space Elevators and Planetary Shields.

Bear in mind, before deploying any of these assets on the surface of the planet, we do require the permission of the patron country to grant us access to construct these bases in their territory. We advise that you perform missions or create contracts with these countries so we may increase our affinity with them.

We have been working on improving the target selection screen at the bottom middle of the PDI. We’ve been setting this screen up to show any object you have selected in either the Fleet Assets menu on the left, or any particular objects in the viewport such as Meteor Clusters or individual targets like Aliens or Meteors. This screen allows us to further the special commands that can be given to different selected assets such as telling ships to trigger specific special equipment like Cloaking Devices, or allows us to setup the Orbital Shipyards to begin construction on new ships or repair current ships. This cleanup of the Fleet Management selection screen will pave the way for us to finish up many of the needed features for next year’s Alpha Release.

Thanks again for tuning into our Development Updates. We plan to have one more update before taking a break until the new year and we will have more information as well about the upcoming Alpha Release!