In this update we will address the lack of updates over the past few months and get you caught up on the current feature additions such as; Telepresence Effects, Light Shafts, and Spaceship Loadouts, as well as a little bit of insight for development for 2020.

Addressing the Lack of Updates

First off, I would personally like to apologize for the lack of updates on my part in the ladder half of 2019. All of you backers deserved better than what I was not able to deliver to you. I was very much attempting the majority of this project on my own back and tried my best to deliver an Alpha to you all in September and failed to do so. This failure was completely my fault as I did not have the financial means to both support my family as well dedicate my full time into Solar Warden. As a result, I was completely consumed by the project and felt very much burned out on it due to impossible milestones I was trying to achieve on my own. I had to make a tough call and sort out what was required of me for my personal life. With that said, I have no plans to terminate Solar Warden and will continue to do so but to a lesser extent. Instead of tackling basically the entirety of this project on my own, I am working on plans on hiring additional personnel to help make this project a reality. I do not believe it is right to ask for additional funding from you all, so therefore I am shouldering this cost on my own and only ask that you all remain patient as we move forward into 2020 and provide you all with better and more frequent updates.

Let me be honest and say that I didn’t imagine that Solar Warden would take on such a immense scope, but I still am happy with the decision to make what I figured would be a simple space game into this awesome Space Shooter/RTS Hybrid. Regardless, I’m happy to continue the project, but need to remind myself of my limitations and to allow for additional developers to come on and pick up the weight where I am unable to. With that said, I will be posting some Freelance job openings soon for Artists, Programmers, and Blueprint Designers with UE4 experience.

In terms of the Alpha, I plan on scaling back a bit of the features and will be looking into setting up a module for everyone to play in 2020 with the focus being around Ship Building and customization. Stay tuned for more information about it in January.

Below are some of things that I have been working on in the past few months since the last update.

When selecting your vessel to take control of, there was never any visual transition effect to your ship. What I was always wanting for this was to have a sort of “tunneling” effect that showed the transition into/out of your selected ships to make it feel like a transfer of digital consciousnesses.

I achieved this effect with a 2D screenspace texture that warps the center UVs of the texture along with some FoV warping as well to give that distorted look during the transitions.

Another visual feature we decided to include was that of Light Shafts from space dust around the planet. These Light Shafts are basically the shadows that are casted from objects that pass in front of the sun and obscure the light from hitting the dust behind it, giving the visuals of seeing these long shadows casted from those objects (Asteroids, Spaceships or even Aliens) 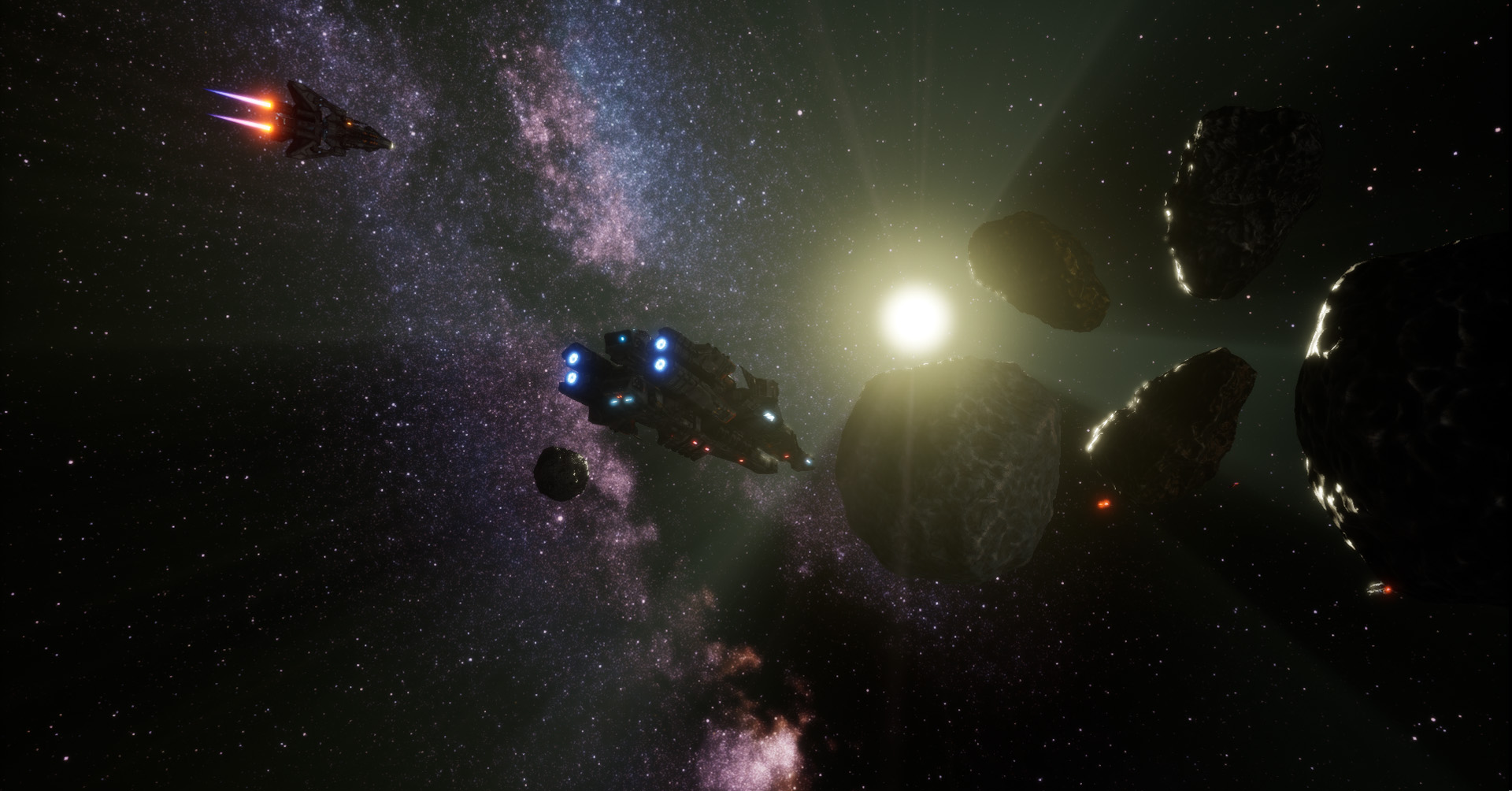 This addition gives a bit more of some dynamic visuals when flying around objects in orbit around the planet. 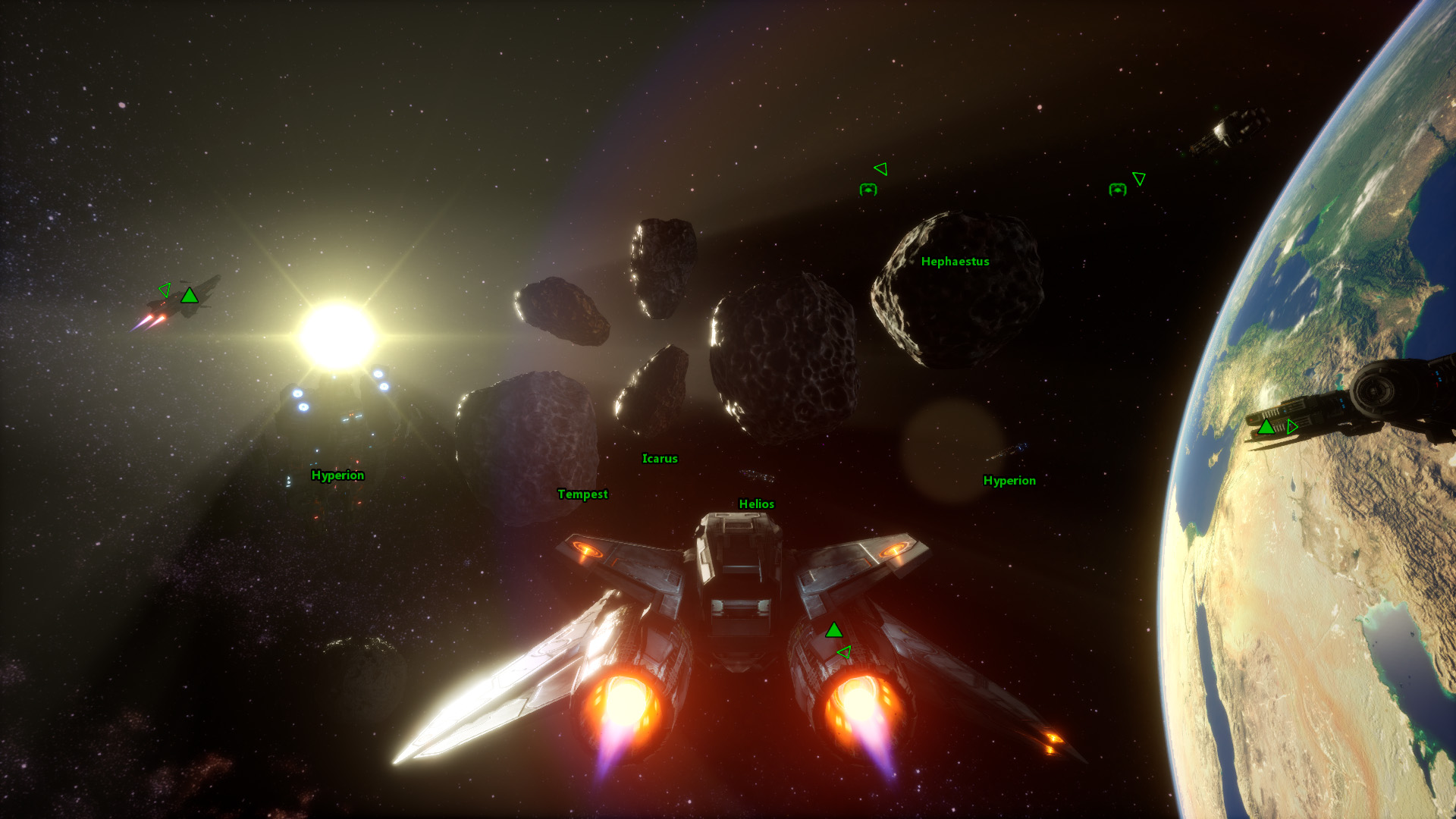 As mentioned in previous updates, alot of work has been put into making the weapons and mounts for ships modular in order to mix and match different loadouts onto your vessels. This is to allow you to come up with your own loadouts for your entire fleet and allow your ships to take on different roles if you wish. As was seen in the Demo, different ship variants spawned for you between different waves, but now with the Ship Building from the Ship Yards, we wanted to expose being able to change those variants to a style of your choice!

Currently, this is a still Work in Progress system and the front end UI isn’t complete, but a lot of the backend systems are working from the Unreal Editor. Here is a quick demonstration.

Below, you can see an Icarus with a standard loadout of Autocannons and Swarm Missiles. 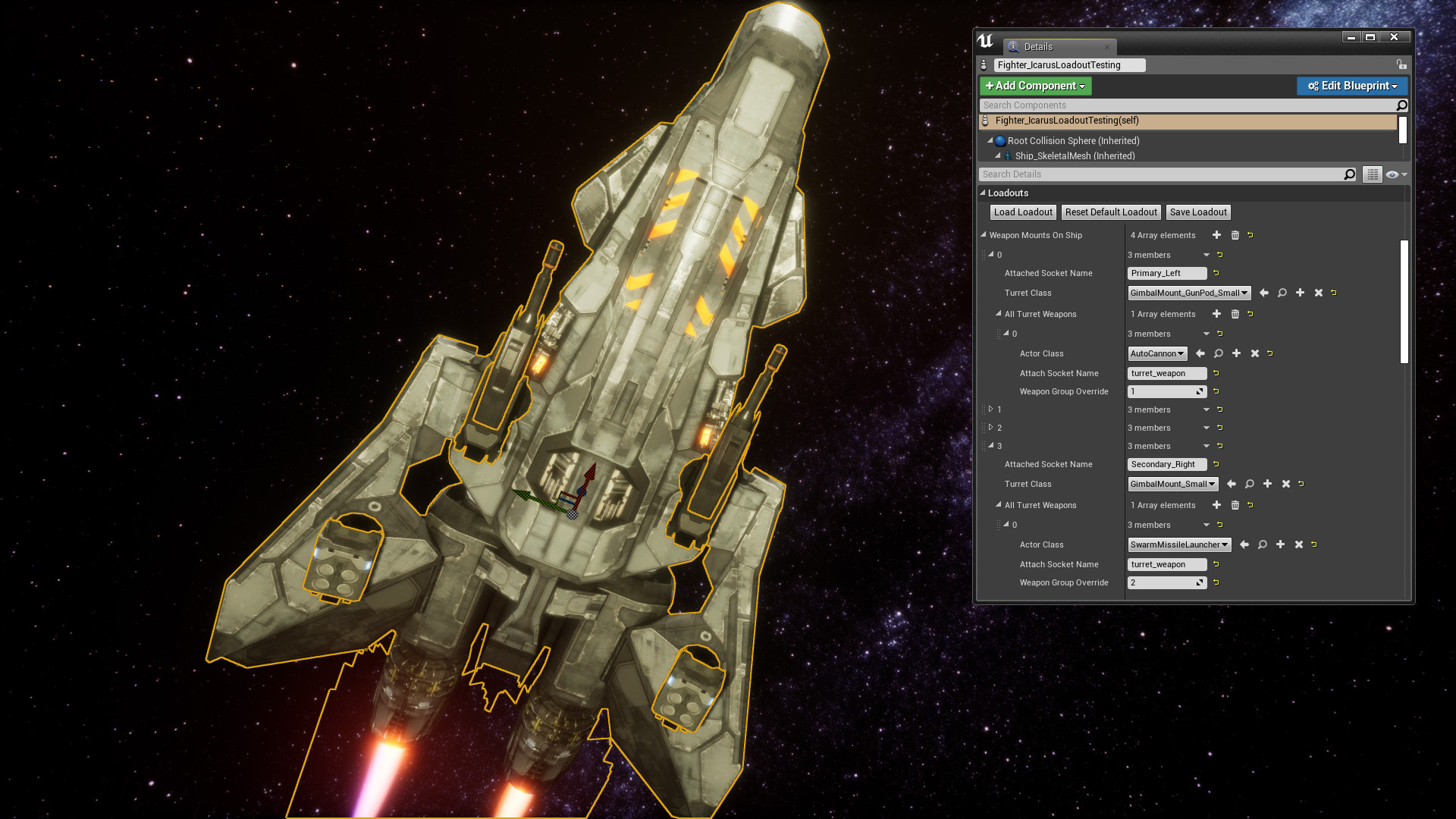 As seen above, each vessel will come equipped with their own arrangement of “Mount” locations. These Mounts will determine what can be mounted in that space (from Turrets, to equipment like Shield Generators, etc). Each Mount will also have a Min/Max size associated with that location as well for balance and stopping oversized weapons being mounted in those locations.

Seen in the above picture, we will look at switching out the Right Wing’s Small Gimbal Mount with an Autocannon to a Fixed Medium Mount. 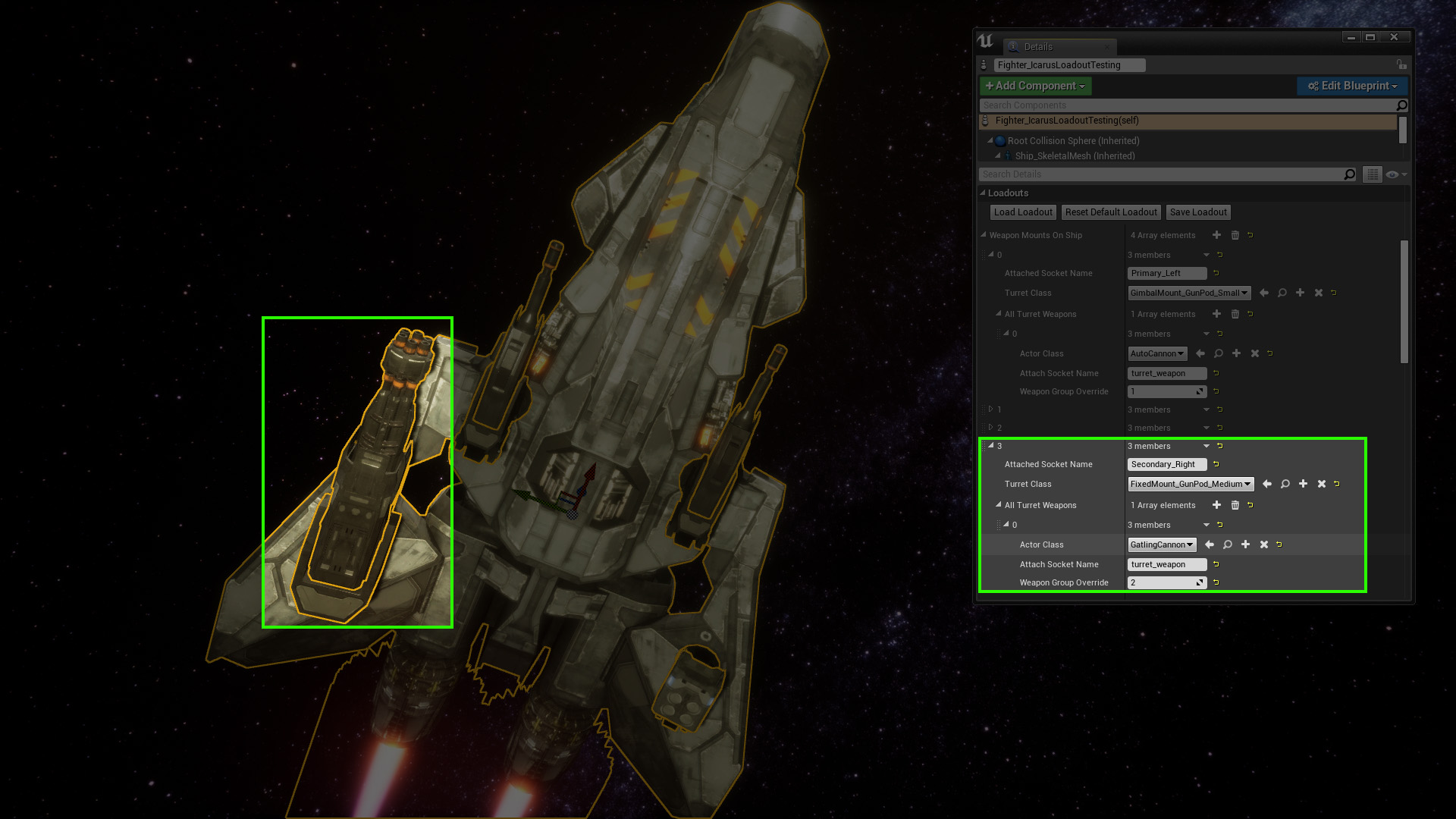 As we swap out the Mount, the previous weapon is cleared and the Gatling Cannon is selected to be placed on this location. At customization time, you will also be able to select which Weapon Group this weapon can belong to as well (1-4) and it will spawn in with those Weapon Groups already assigned for your ease of use. 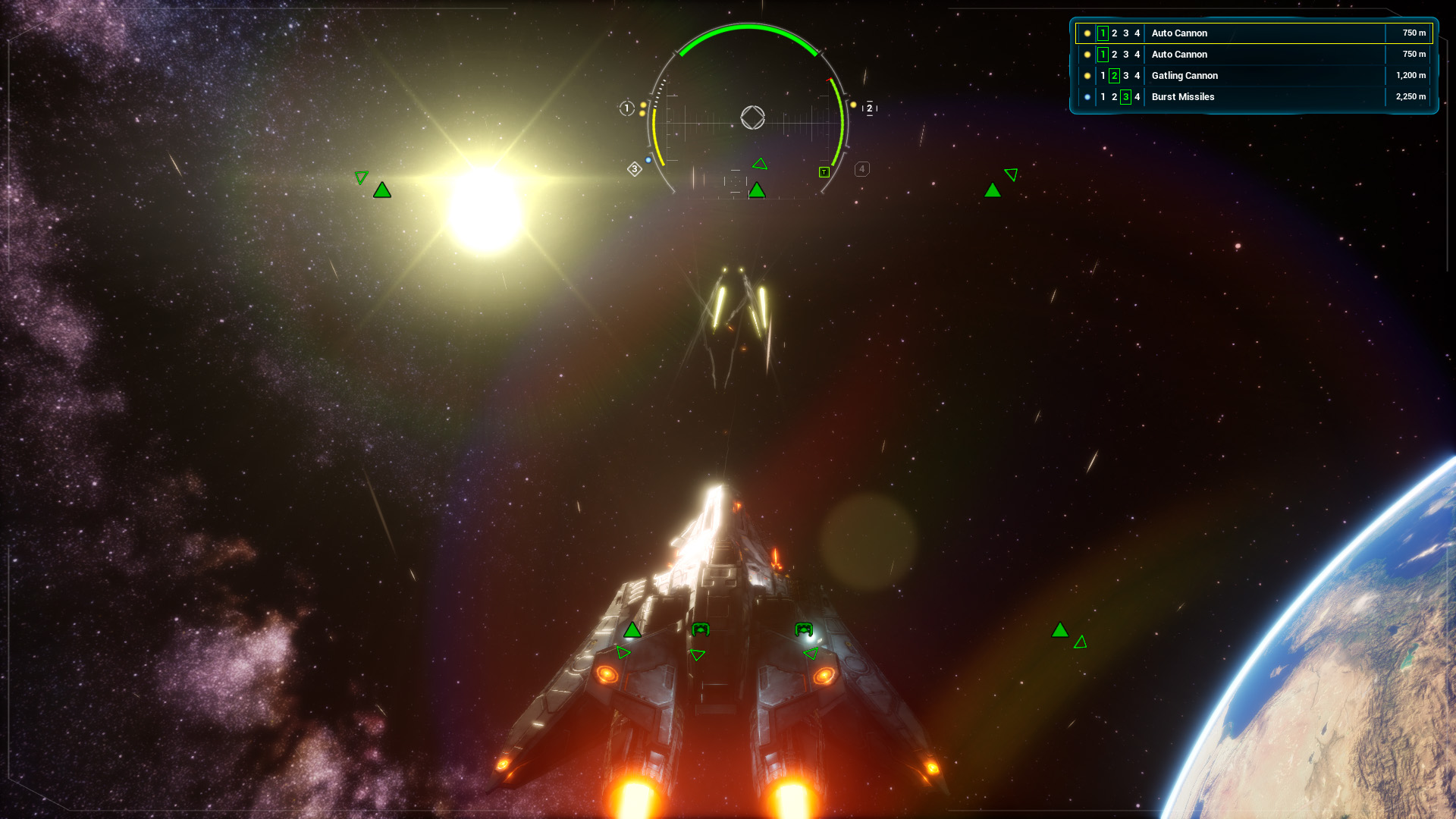 Once your customizations are complete, you will be able to save out that loadout and either modify a ship to change to that loadout or you can build a whole new ship with it as well. Telepresence into that vessel and you will have all of your weapons ready in the weapon groups assigned as well!

As stated above, we are still continuing development and will be posting openings to bring on more help early this next year as well as polishing off what we need to finish with Ship Customization for the Alpha Release.